Collapse of the Union Update

You may not have to worry too much about the collapse of the union, the rest of the UK tilting to the right and Britain leaving Europe just yet.

Though newspaper headlines remain as excitable as ever, this week has seen a sizeable fall in the implied probability that Scotland will leave the UK.

This probability is calculated from the betting markets. Today you would be paid £5 for a £1 bet that Scotland will vote yes. A No vote will pay only £1.24. The implied probability is then simply 1 divided by this payout. So today the implied probability of a Yes vote today is 1/5 or 20%. On Monday this number stood at 1/3.2 or 31%. This is a sizeable move in 4 days. To put it into perspective the graph below shows the payout if Scotland votes yes for the last 5 months (a higher number here means a higher payout so a lower probability of a yes vote).

Payout for a £1 Bet if Scotland Votes Yes 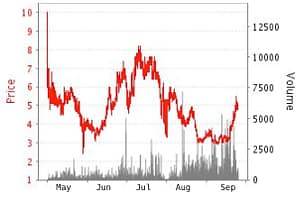 All this should reduce the Political uncertainty that would go with a yes vote.  This should be good for sterling, good for Scottish banks (who will benefit for a continued Bank of England support) and good for the political status quo. Britain may not be on its way out of Europe just yet.