Our outlook for the UK

Now December is here, thoughts naturally start to turn to the year ahead and – in the investment business at least – what opportunities it might bring. We will be doing our usual 2015 outlook piece later in December but for now we thought we’d share some thoughts on the outlook for UK equities and sterling.

This has been a disappointing year for the UK market: the FTSE 100 Index is up +3.1% compared to an MSCI World sterling gain of +10.9% (both total return, as at the end of November). Conversely, this has been another banner year for UK government bonds which, having lost -4.1% in 2013 made that back and more and are now up +12.6% year to date. How likely are these trends to continue? Much of the difference has been driven by the variance between the US, which is finally escaping the clutches of the 2008 credit crisis, and the Eurozone, which is emphatically not. While the UK economy has recently been the strongest in the OECD its fate is tied closely to that of its largest trading partner, continental Europe. As Europe started to slow down mid-year, so UK equities started to underperform the US (see chart below) and UK government bonds, which had been marching in lockstep with US treasuries, started to look more like their ultra-low yielding French and German counterparts. Similarly sterling, which peaked at 1.72 vs the US dollar in July then fell by 8% to 1.57 today. 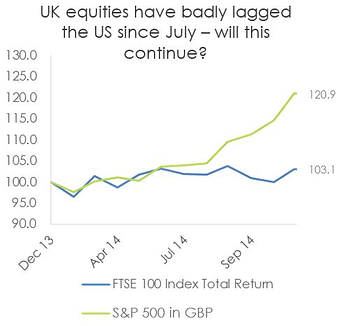 The other factor looming on the UK’s horizon is the May 2015 election. Both the traditional left and right wing parties have seen their vote split. Labour looks like it will lose much of its traditional Scottish heartland to the Scottish nationalist party. The Conservatives are haemorrhaging voters to the anti-Europe and anti-immigration UKIP. This means no clear front runner, probable coalitions between unwilling partners, uncertainty. A right wing more market friendly conservative victory would lead to a promised Conservative referendum on Europe that would make the recent Scottish independence vote look like a model of clarity and restraint. A left wing Labour victory might even for that reason alone be preferable but it would mean a traditionally less business friendly political environment.

As we have written before we are actually relatively bullish on the opportunity in European equities. We think much of the gloom in the outlook for Europe is priced in. This leaves equity valuations at attractive long term valuations (unlike the fully valued US market for example) with two clear catalysts: cheaper borrowing costs as the effect of falling interest rates continues to feed through to corporate balance sheets and a structurally weaker Euro. Any further QE is of course a bonus as it just helps further these two trends.

This of course means we should also be optimistic that the UK might reverse its recent underperformance. A recovering Europe is unambiguously good for the UK. However, the other factor weighing on UK equities is its large exposure to energy and mining stocks. Commodities are in a renewed bear market and with oil closing at $66 a barrel (down almost 40% since June) these stocks are likely to remain under continued pressure. Add the election uncertainty factor and we remain happy to stay underweight the UK and overweight Europe. We think these effects will stay in place for the first half of 2015. However, with the election uncertainty premium removed and, perhaps, some stabilisation and recovery in energy markets we think the UK and sterling could be poised for some strong performance in the second half of the year.