We are not, I’m afraid, talking summer holidays here. If we were, Mrs Brown and I would probably opt for the slightly calmer and cooler (in both ways) Californian beaches over those of the South of France. The problem we have though is that the stronger dollar (up over 15% in the last year against the Euro) and pricey flights make this the significantly more expensive option.

Equity investors face a similar choice. Pricy but attractive US versus cheap and ugly (from an economic fundamentals basis) France. Which is a better bet? GMO, the US asset management firm, have recently run some interesting numbers which help throw some light on this question. For those who struggle to read a whole 700 word blog piece, the answer is France, or broadly the Eurozone1. The reasons are below.

Essentially, the choice boils down to buying underperforming markets that look cheap but with lousy growth prospects (say the Eurozone) or ones with good growth prospects but which look expensive (the US). The first point GMO make is that, using MSCI World Index since 1984, the top 20% of MSCI country equity markets (using a trailing 3 year basis) on average underperform over the next 1 and 3 years. Similarly, the top 20% of countries by GDP growth also under-perform (see Chart1). 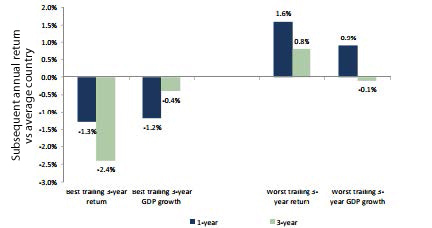 This points to a contrarian, mean reversion style approach. Note also that faster growing countries on average under-perform on a forward looking 3 year basis. This goes against the usual argument that you should invest in country X because its economy is doing well. The US, UK and India fall into this camp today. China and many emerging markets have had this argument made about them many times in the past. In fact, GMO show that even over longer time horizons (30 years) there is little correlation between GDP growth and stock-market returns. In fact, if anything, it looks like faster growing countries have slightly lower stock market returns (see Chart 2). Emerging markets show a similar correlation. 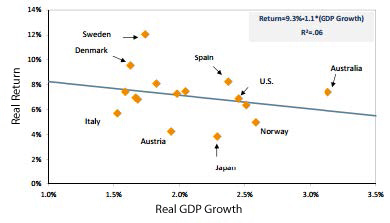 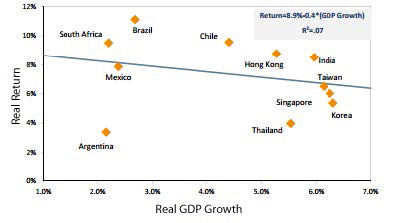 Why is this? GMO speculate that countries have to invest a lot to achieve the faster growth you see in the charts above. The costs of the investment may mean lower returns for equity investors. Low growth, defensive Switzerland has been a better investment than high growth, high investment Australia for example. As an investor you care about the returns after investment. Investment looks to be a much better deal for the countries concerned than for the local companies actually spending the money.

One caveat to the GDP point is that although long-term GDP does not matter, shorter term (3 year or less) surprises to GDP do. You would, if you could, pick equity markets where growth is likely to surprise on the upside. The problem is surprises are by definition hard to predict. What feels like a reasonable view given all the available information is probably already priced in. That said, heavily negative sentiment towards a region or economy looks to be a positive factor for future returns over the medium term.

What does this mean for France vs California? First, structural lower growth for the Eurozone vs the US is not necessarily a bad thing for future equity returns. Second, better to be in a cheap under-performing region where the expectations bar is set low rather than the other way round. Both these mean we are reducing our US equity exposure and recycling it into the Eurozone. We also like the fact that there are three related catalysts that could trigger some catch up growth by Europe: QE, a weaker Euro and lower bond yields.

The good news is that at IPS my views carry some influence and Europe wins. Our client portfolios are being adjusted accordingly. The summer holiday is, however, a different story. I await Mrs B’s decision with interest.