US high yield interest rates have recently risen to over 9%. The good news is that this market once again has interest rates true to its name. The worrying part is as prices have fallen a few smaller US high yield funds have suspended redemptions. This is an eerie echo of 2007 when two Bear Stearns funds focussed on the sub-prime market collapsed in July of that year. These funds proved to be the proverbial canaries in the coalmine warning of major problems in credit markets ahead. Is the same true of high yield today? 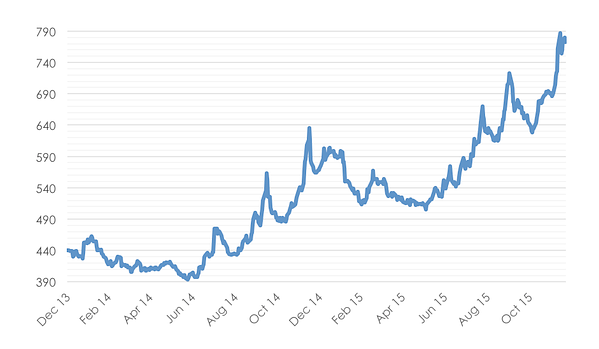 US high yield spreads have doubled since 2014 lows

There are two main reasons to be optimistic. The first is leverage. It was not unusual for funds to be 10 times or more levered in 2007 and the main reason that the Bear Stearns funds collapsed so quickly was that they had so much debt financing that had to be repaid as prices fell triggering more forced selling. Today the vast majority of credit funds – including the mutual funds that suspended redemptions this month – are unlevered. The 2008 credit crisis was in part an unwinding of over-leveraged credit investors. This does not look to be the problem today.

The second difference is risk appetite. Most investors in the Bear Stearns and other credit funds thought they had a low risk investment. Often these funds carried (what turned out to be bogus) AAA credit ratings from the major ratings agencies. As investors woke up to the fact that their positions were in fact highly risky and geared to a collapsing US housing market they pulled all the money they could from market. Hence the crunch part of the credit crunch. It is not obvious that high yield investors today think their investments are AAA quality. High yield fell by about as much as equities in 2008 and has had regular ups and downs since then. The ticker for the largest US high yield ETF is JNK and stands for the alternative name for high yield – junk bonds. Nobody likes to lose money but we think high yield investors are more alive to the risks they are taking than their 2007 equivalents.

So short term this looks like more of an opportunity for 2016 than a threat. As always, though, there is something to worry about. What the December fund suspensions have illustrated is the lack of liquidity in bond markets, especially when everyone is rushing for the same small exit. This is true across nearly all fixed income markets and reflects that banks’ traditional role as middleman has been dramatically reduced by regulators post 2008. The worry therefore is that the high yield sell-off triggers more people to leave the asset class, worsening liquidity, leading to more losses and more redemptions. Ultimately this would reduce credit availability for US firms and – though the impact would be smaller than 2008 because of the lower leverage – trigger a renewed credit crunch.

We are therefore not diving into US high yield just yet. If the US economy continues to make steady progress and this is a passing squall for high yield we will look to invest. Even allowing for the default rates we expect in the energy sector, current yields look an attractive return for the risks involved. However, if the situation in the US high yield market continues to deteriorate this will not only be a sell signal for US junk bonds but also for most risk assets, including of course equities. This is a market we will keep looking closely at.