Brexit: What we do and don’t worry about

We have had several conversations with clients on what are the risks and the implications for our portfolios of Britain leaving the EU (a “Brexit” in the common media parlance which we will sadly follow for the rest of this note). This note summarises our view, why we think our portfolios are robust (even if the Leave campaign wins) and the short term trading opportunities we may see in the run up to the vote.

Our conclusion is that the longer run economic implications of a Brexit are unclear but are likely to be relatively small and certainly less than those claimed by either the Leave or Remain campaigns. The bottom line is Britain can prosper inside or outside the European Union and because of the closeness of our economic and political ties claims of dramatically reducing our EU regulatory burden and/or increasing our economic sovereignty are likely bogus.

The political and symbolic/emotional arguments are stronger. We would certainly gain from having better control over our borders but we would lose influence over the development of a European Union that will, whether we are on the inside or outside, affect us greatly being both our biggest trading partner and nearest neighbour. Are the gains of Brexit worth risking a period of heightened uncertainty, painful negotiations and paused foreign investment that a decision to leave would surely mean? We leave that to you to decide. Our message is that the longer run investment implications look limited and we are prepared, as best we can be, for any shorter run market gyrations.

Summary of the economics of a Brexit

We think there are broadly four reasons why the Leave campaign wants out of Europe:

These seem attractive goals at face value but how close would a Brexit really come to achieving them?

Seen through this lens then a Brexit would mean swapping one set of complicated rules and agreements with the EU for a new set of complex legislation. Would the new deal be better for the UK? Possibly but this is far from assured and in the short term the uncertainty impact would surely be negative. Direct investment into the UK would drop and remember that the current migration policy is a boost to tax revenue and growth. We would save on the EU contribution of course but this is small (around 0.4% of GDP) and we will likely have to continue to contribute to the EU budget anyway to be part of the free trade area (as Norway and Switzerland currently do). The bottom line is that we doubt that longer run growth rates for the UK would differ much in either scenario. From this perspective the symbolic, emotional and political importance of Brexit outweighs its economic importance.

How likely is it to happen? 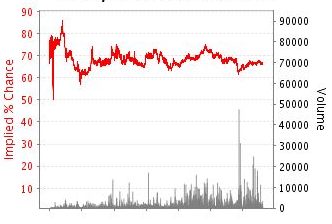 There are two places to look: the polls and the betting markets. The polls on average are showing a small advantage to the Remain campaign (51% to 49%) as we write with a good number of undecideds. If history serves as guide, then in previous independence votes the undecideds have tended to side with the status quo (as happened in Scotland and most famously Quebec). This means the probability of a remain vote is probably a little higher than the polls suggest and the betting markets we track reflect this bias. The implied odds of a Brexit from Betfair suggest roughly a 67% probability of a remain vote, a decision which has remained fairly steady over time (see Chart 1).

So our base case is for the UK to remain in the EU. However, the polls were very wrong ahead of the last UK general election and remember that a 1 in 3 chance of leaving (equivalent to rolling a 1 or a 2 with a normal dice) is still high enough that we should be prepared for it to happen. To pick a grim example, further terrorist activity in Europe or here may yet tip the balance in the Leave campaign’s favour.

Implications for markets and our portfolios

Our client portfolios therefore need to be robust and ready for the Leave campaign to win. We have argued above that the longer term economic implications are not likely to be as large as proponents on either side of the argument state. The UK can survive and prosper inside or outside the European Union. This combined with the fact that our portfolios naturally have a focus on being as diversified and as global as possible (with the majority of the investments being focussed outside the UK) means that we are comfortable that we have the right longer run investments for our client portfolios. In the shorter term, however, there will be volatility and some tactical opportunities. We summarise the moves we expect to see if a Brexit happened in Table 1 below.

Table 1: Impact on selected asset markets of a Brexit

We see the major transition mechanism for a Brexit shock being a weaker sterling exchange rate. We are therefore currently underweight sterling in our client portfolios and so will generally benefit if sterling weakens further. We view this as a hedge to partially protect against shorter term equity market falls which might happen post Brexit. Longer term we expect equity markets to look through the Brexit noise (with one important caveat below) and so are happy to keep our core equity investments. Also, remember that our view is that the UK is more likely to remain. As we approach the referendum date we may reduce our underweight sterling exposure on any sterling weakness to lock in some gains. Finally, our property exposures are also biased away from the top end of the London market towards higher yielding regional UK markets which are less exposed to swings in sentiment and demand from global property investors.

Our core view then is that even if Britain does choose to leave the EU it can still prosper and the economic reality will not – in the longer run – be that different from today. Given that relatively benign view, what are the other longer run risks that we should consider?

One risk is that Britain leaves the EU and, as the Brexit campaigners argue, thrives. This could be because Britain really does end up in a materially better trading and regulation position than before (not our base case but possible). More likely, however, is that the Eurozone continues to struggle as the contradictions involved in having a currency union without a political union lead to more flare ups in the most pressured regions such as Greece, Portugal or Italy. In this case “thriving” would be defined relative to much of the rest of the EU. In this case, why would the richer EU countries like the Netherlands, or even France, not want a deal like the UK’s? Longer term the EU probably has more at risk from a Brexit than the UK. This will however take time to develop. At first, the UK is unlikely to look like a success story if it leaves: uncertainty will rise and the inevitable difficult and lengthy negotiations will no doubt drag on and on. It is however the risk we are focussing most on today and, if this situation starts to develop, would likely see us reduce our European equity allocations and our overall risk levels.