Hindsight Is A Wonderful Thing….

Sometimes it would be helpful in this business to have a Delorean style time machine. Occasionally, though, it would do no good at all. If we had been able to magic forward to lunchtime on June 24th and see the result of the referendum vote and the impact it had on markets we would have been pretty gloomy. In fact, it turns out the right thing to have done would have been to add risk on a Leave vote. Markets have been having a July post-Brexit party.

Why? We think two reasons. First, Brexit dragged down bond yields in the UK and had a knock on effect lowering interest rates elsewhere. For economies that don’t have much to do with the UK – like the US – this is just more stimulus. Secondly, and just as importantly, post-Brexit the data has been good. The Citibank Economic Surprise Index shows that we have had 15 days of positive data surprises in a row in the US – the longest run of positive good news since the series began in 2003. This shows the rally is grounded in the real world and not just dependent the actions of central banks. This gives us some optimism it may continue. 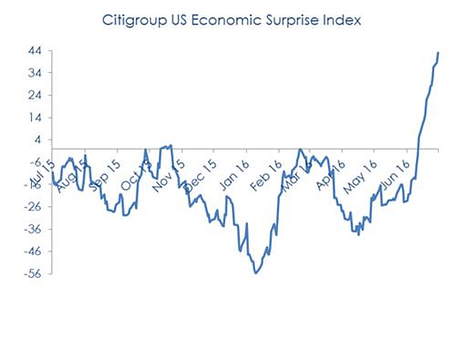