What if a hard Brexit actually happens? 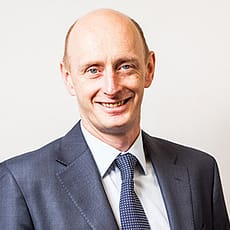 With six months to go, we thought it would be a good time to take stock of where we are on Brexit and the implications the different possible outcomes would have on our portfolios and returns. From a market perspective, a fudgy, compromisey, typically European style deal which pleases no one but everyone can just about live with, looks to be priced in. Unlike before the referendum, interest rates and sterling both trade independently of the steady Brexit news flow and markets have more or less tuned out, assuming some sort of deal will eventually get done.

But imagine (as now looks likely) Theresa May comes back with a watered down version of the Chequers plan in November (or December) and it is voted down by MPs. Then what? Resignation? New elections? A new referendum? A cliff edge hard Brexit? It is in many ways the uncertainty of opening this Pandora’s Box that means the deal will in fact most likely be voted through. But you just cannot rule out the risk that the UK’s politicians – who almost to an MP dislike the Chequers plan – commit some sort of political Hari Kari. Labour MPs might like the idea of fresh elections, Brexiteers might welcome a hard Brexit. What then?

For us as investors, the scenarios then boil down to some sort fudge happening anyway (maybe a 90% or so probability) or a hard, cliff edge Brexit. Fudge would of course mean no real change. Risk markets and returns would continue to be dominated by the economies of the largest players: the US, China and the Eurozone. There might be some sort of relief rally in UK assets once some of the Brexit uncertainty is reduced, but we would be surprised if this was long or long lasting. On the other hand, a hard WTO style Brexit would – like the referendum result itself – be a real shock for markets. In some ways we expect the shock would be larger than the referendum itself: the resulting headaches and disruptions would begin pretty much immediately and there would be no clear roadmap on how – or indeed who would – fix many of them.

However, one lesson from Brexit is that what the market thinks is bad for UK plc is not necessarily bad for your investment returns. To explain why, below we list what we would expect to happen to the major asset classes in a cliff-edge Brexit scenario: 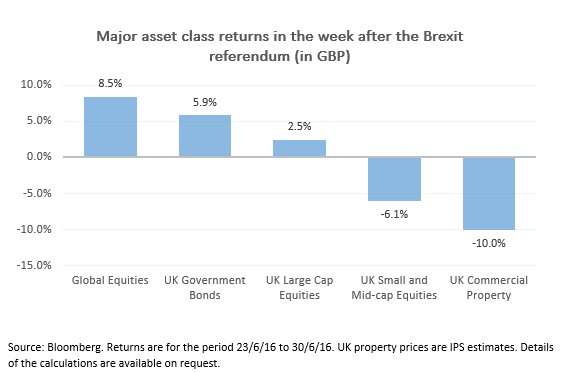 If this all sounds a bit familiar, this is because we saw all of the moves around June 26th 2016 when the referendum was announced. To illustrate the magnitudes, Chart 1 above shows the major asset class returns for sterling investors for the week following the Brexit referendum. The broad message for our clients is that we have most of our exposure in the three sectors that made money in this period and limited exposure to those that do not. To put some numbers on this, our mid-risk level Diversifier strategy has 61% exposure to the winners (Global equities, UK large cap and UK government bonds) combined and 10% exposure to the losers (UK mid-cap and Property). If another Brexit shock wave rolls in, we think our sterling clients at least should in fact benefit from the chaos.

The overall message here is that we think there is a 90% or so chance that – from an investment perspective at least – Brexit will be a non-event for markets. If we are wrong (which, of course, happens), then we think our investment portfolios should be well protected because of their international focus. We hope this gives you some comfort for the months ahead!