Below is a well-known (in investment circles at least) graph of the investor’s emotional journey over time. We are showing it in this quarter partly as a check so we can pause to see where we are on this cycle today and partly to gently remind our clients of the inevitable ups and downs of investing. It is important to make sure we are running the right level of risk for each of you at any point in time so that we are able to ride this wave without too many stressful moments along the way. The more you are able to keep a clear and calm head as an investor the better decisions you are likely to make. I would urge you all to re-think about how much risk you can tolerate today and to check this matches what we are running for you today at your next meeting with us. 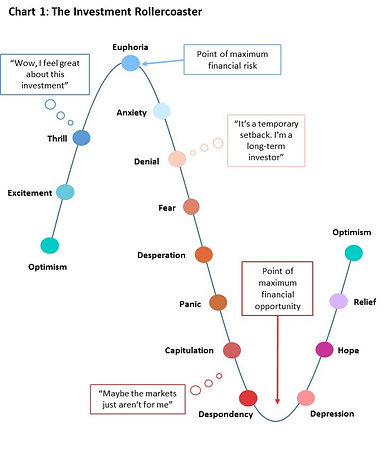 Part of the challenge of investing is that – with the benefit of hindsight – the emotional cycle looks pretty obvious. In real time, however, it is much harder to know exactly where you are. (If you did then timing the market would be much easier!) Why do equities markets, say, not just drift steadily higher with prices close to the fair value of all the companies that make up the index? One answer lies in something known in the jargon as confirmation bias. This is a bias we all have: we prefer to read articles that confirm our current views and to ignore or downplay ones that challenge them. In the run up to an England sporting fixture, say, you are more likely to read positive, optimistic takes on the team’s prospects. They might win after all! After the seemingly inevitable defeat the stories will turn more negative: the coach wasn’t up to it, key players were injured we simply weren’t good enough. Of course all these things were true before the match but newspapers naturally write stories that they think people want to read which is subtly different from telling readers how the world is. Similarly, in investing, on the way up bad news is downplayed. On the way down, however, the demand for bad news is much, much higher. Good news is downplayed and it is the risks – be it trade wars, Trump or Brexit ­– that make the headlines. In short, the markets make the news, not the other way round. This helps create waves of optimism and then despair that drive investment cycles. (It is also one reason that we try hard to avoid newspapers as a source of information and instead look to get our views from independent professional research providers.) 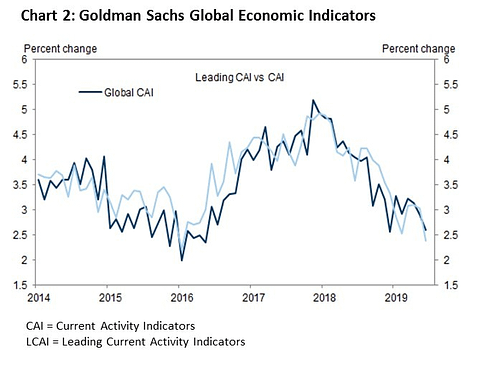 Today, after a 10 year bull market, it sure feels like we are near the top. However, one feature of the last 10 years (with one important caveat below) is that there has been very little in the way of excitement or thrills on the way up. There has been an almost permanent state of anxiety that the next crisis might be just around the corner. A few years ago it was the potential collapse of the Eurozone, then it moved to fears of a debt bubble in China. Today we have the Donald and Brexit. We don’t think that confirmation bias has been strong enough yet to create a real euphoric, optimistic market top.

This means that many of the warning signs you normally see at the end of an expansion are simply not flashing red. Wages and business investment remain subdued. Property markets are not cheap but not on another debt fueled boom either. The rise of technology is threatening so many sectors that the businesses within them are more focused on defence than attack. 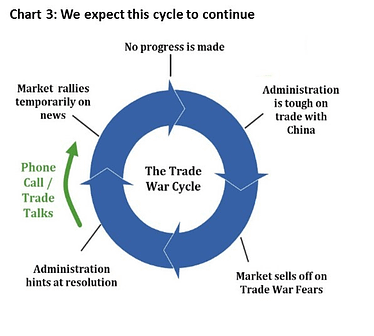 The optimistic interpretation of the chart is that we are bottoming and – as we saw in 2016 – this is the right time to be a bit braver. We remain hopeful that this is the case but for now we continue to run at the lower end of risk range in our portfolios. One reason that we are comfortable doing this is that we have retained our exposure to the equities that have the most upside if the economy does turn up again. These markets are the UK (pretty much uninvestable for overseas investors until there is more clarity on Brexit) and emerging markets (hit by trade war concerns).

Crisis in the UK has also generated a longer term investment opportunity. More domestically focussed mid-cap equities are trading near to their all-time lows of the last 30 years. The eventual outcome and timing of the Brexit process remains unknowable but we think when some clarity returns some of this value will be unlocked. We want to make sure our clients keep exposure to this today so they can profit as and when this happens.

The other region where we are holding on even in the face of some pretty negative headlines is emerging markets. Here the headwind has been the Trump trade war rhetoric and tariffs. Unlike Brexit, we are less optimistic of any shorter term trigger that might see a re-rating of emerging market assets. Although Trump will inevitably one day leave office he has changed the political landscape for good. The China/US rivalry will only grow as Chinese economic power continues to threaten the US’ international dominance. Being seen to stand up to China will continue to be popular politics in the US. Also, China has learnt from this episode that its economic growth cannot rely too much on US cooperation.

Overtime, we think the Renminbi will slowly rise to be a global international currency to rival the dollar. We also expect the trade war cycle we have seen in the last couple of years (see Chart 3) to keep on going for the foreseeable future.

Our investment case is, therefore, longer term. Economies over time should gradually adapt to this new normal. The highs and lows of the mini-trade war cycle aside, we think much of the reality of the trade war is already priced in to today’s markets. This leaves emerging market equities looking potentially well priced for future returns. Charts 4 and 5 below show that today’s valuations are consistent with future returns of 8% to 18% per annum. These are easily attractive enough for us to justify holding on through today’s volatility and noise. 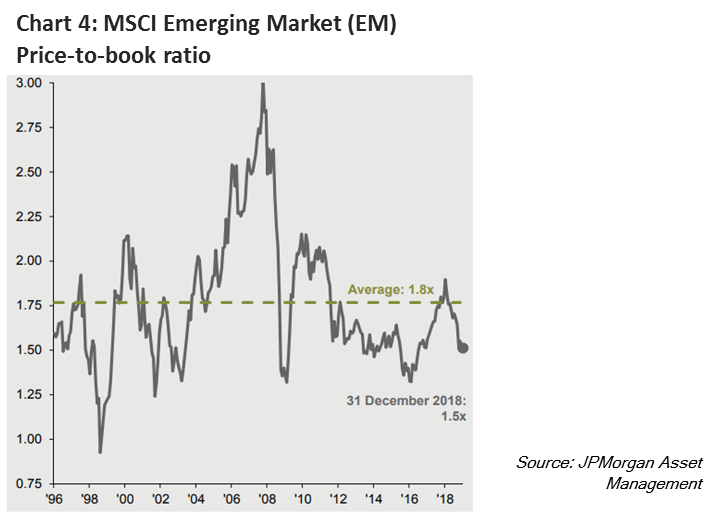 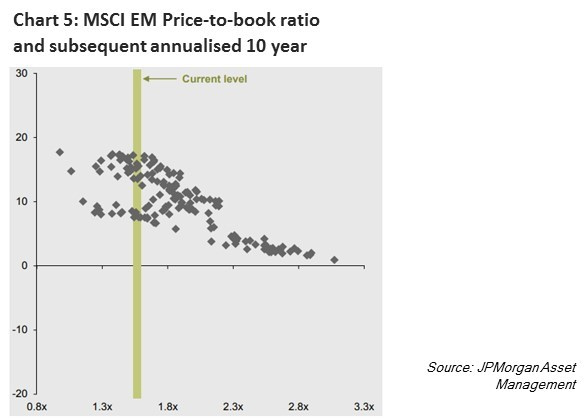 The one area we do think is at the thrill/euphoria stage of the cycle is early stage venture capital style investing, particularly within the technology sector. The potential riches associated with owning the next Facebook or Amazon have understandably attracted many into this arena. However, there looks to our eyes to be a classic case of too much money chasing too few attractive opportunities. This has led to sky high valuations: it is perfectly normal to see businesses valued at 10 times revenue or higher. One example of this is WeWork which is in the property sub-letting business. In spite of the fact that it is money losing and barely a technology company it tried to go public with a valuation of $47bn. Thankfully, sanity prevailed. However, this may trigger a broader shakeout in the technology sector (as, slowly, valuations come back to earth). This could easily have a knock on effect onto the many parts of the economy that are benefiting from the investment that is flowing into the technology sector. We have avoided as best we can getting drawn into this part of the market and we remain vigilant to the risks should it start to show signs of weakness.

Why are interest rates staying so low?

Finally, some thoughts on the other half of the investment universe. Government and corporate bonds offer a fixed return (hence the name fixed income) and, unlike equities, some certainty of getting all your money back at the bond maturity date. The risk they run is that if inflation rears its head you have locked yourself into today’s low returns even as inflation slowly eats away at the bond’s value.

One of way of thinking about this is that low and/or falling interest rates suggest that the market thinks the risk of a material rise in inflation is also low and/or falling. Interest rates certainly are low today. As an example, the interest rate to lock up your money for 10 years today in sterling is below 0.5% as I type. In theory, this 10 year interest rate should be (approximately) equal to the average short term interest rate (i.e. the one you would pay a floating rate mortgage on) for the next 10 years. Short term rates are 0.75% today. The market is therefore telling you that interest rates will not ever rise over the next decade from today’s near zero rates and are in fact more likely to fall. 10 years ago this would have seemed far-fetched. Today – especially looking at the examples of Japan and the Eurozone where negative interest rates are now a feature of the landscape – this looks like the most likely outcome. The market is therefore telling you that inflation should not be your number one worry. Rather the risk is deflation and slow growth. For the last few years we have had a focus on adding strategies that are attractive in these sorts of low growth environments. This has included our infrastructure investments in areas such as solar and wind farms. These have worked well for us for the last few years and, if bond markets are right, we expect this good run to continue. We are therefore selectively looking to add to them when we can find attractive options.

Part of the reason for today’s low interest rates is therefore that today’s low growth and low inflation is expected to carry on more or less indefinitely. Another part of the answer though is that shifting demographics continue to push interest rates lower. It is no coincidence to our eyes that the country with the fastest aging population – Japan – was also the first to experience low and even negative rates. As we live longer we need to save more and as we age our ability to ride the ups and downs of risky markets reduces. This is because we simply may not live long enough to see the recovery after a sharp market fall. This forces savers in aging populations to buy more and more bonds. It is this seemingly unending demand for fixed income investments that is forcing bond prices up and so interest rates down. This looks like a longer term structural force to us rather than a short term market top or a temporary artificial market generated by the actions of central banks.

If this second scenario is true then we think this provides a good longer term environment for risky assets like equities. In nearly all developed market countries, the dividend yield available in equity markets now exceeds the yield available on cash deposits. And if you want to make returns that will comfortably beat inflation over the longer term there are very few alternatives to equities. For those able to ride out the emotional roller coaster we still think equity markets are best placed for a longer term focused investor to be.