What Returns Should You Reasonably Expect?

What returns should you reasonably expect from your investment portfolio in the future? This is a question we are often asked not least because we are 10 years into an economic expansion and we have just come off a strong year for equity markets. Does this mean this year’s returns will be lower? What about the longer term outlook? Let’s start with the fact that we are not particularly bearish today. Many of the equity markets we track look fairly priced to us when compared to long term averages. However, the return projections we use for our portfolios (and which are based on projections from Mercer Consulting) are lower than our recent return history. What is driving this?

Let’s begin with the short term. There is essentially no correlation between this year’s and next year’s returns, so don’t sweat it (see Chart 1). A bad year can be followed by an even worse year (as happened in the 1930s). Equally, good years are often followed by good years. Momentum in markets is real and strong risk markets can help encourage consumer spending and corporate investment and so create the economy that supports the valuations. 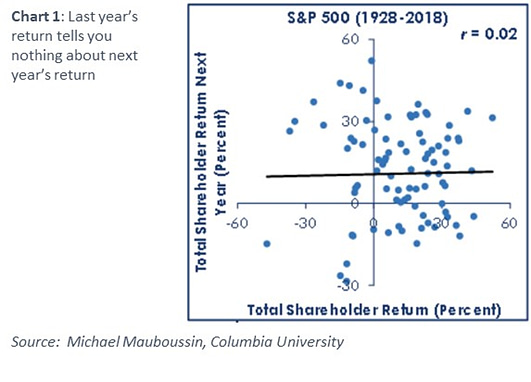 What about the argument that we are 10 years into an economic expansion and so are due a recession? There a few problems with this line of reasoning. First, there have been 7 US recessions in the “modern” economic era (i.e. since the 1960s). This is actually a pretty small sample size from which to draw any firm conclusions (imagine doing a poll for the recent UK election which had 7 participants…) and if we expand our sample to include countries outside the US we come pretty quickly to Australia which has not had a recession for 29 years and counting. Why can’t the rest of the world start to look more like Australia?

There is also the more fundamental point that the economy is not a static machine. Participants (consumers, companies) learn to adapt and change behaviours after each crisis. So large debt driven recessions (such as 2008) see lower growth after them as consumers and companies focus on paying down debt rather than borrowing to spend and invest. Similarly, and just as importantly, central banks are constantly adjusting their models and approach to adapt to changing economic behaviour.

The bearish take on this is that today’s low rate environment is pushing up debt levels and enabling “zombie” companies (which rely on cheap debt) to survive. This means that the next downturn, when it comes, will be all the nastier because of it. The optimistic view is that central banks are slowly learning and getting better at the job they are tasked to do – i.e. to keep the economy at close to full employment and stable and low inflation. Whichever view you hold my point is that economies are alive and dynamic. The period after 2008 was not like the 1930s as economists and politicians could learn from their mistakes, avoid the old ones and (probably) get to make new ones that will only emerge over time. Comparing today to the past is harder than you think. We are probably not “due” anything but are making our own unique economic history and business cycle.

So last year’s returns don’t help us at all, and sensible reflections on history probably help us less than you think. Is there anything sensible we can say about the future returns for your portfolios? Actually, there is. Let’s start with boring old government bonds. Here yields are exceptionally low in the UK and across the world. Base rates in the UK are 0.75% today and the market is projecting them to fall over the next 10 years rather than rise. This compares to an average rate of 4% to 5% in the 2000s for example. Even in real, inflation adjusted terms, returns from government bonds are much lower than they were in the past. In the 2000s you could earn inflation plus 2% to 3% in boring old bonds. Today you are pretty much guaranteed not to keep pace with inflation.

So returns from bonds will be low forward looking. As they are fixed return investments this is pretty much locked in today. What does this tell us about future equity market returns? The good news is that, over longer term time horizons, equities have reliably generated a positive return in excess of government bonds (this is called the Equity Risk Premium in investment jargon). But the lower government bond yields are, the lower this equity return is. 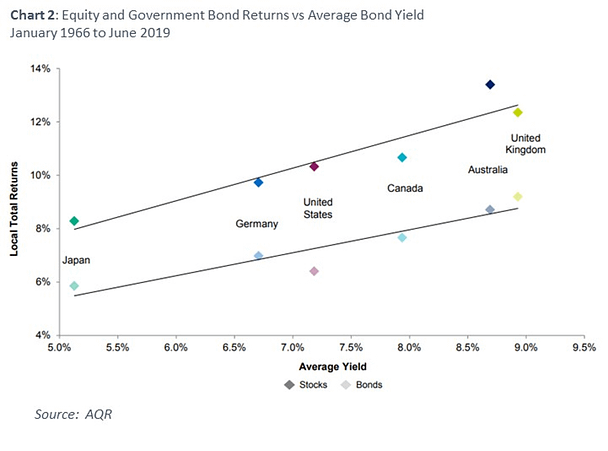 What is the intuition behind this? One explanation today is that low bond yields today tell you that growth and inflation will be lower in the future than it has been in the past. Lower economic growth means lower profit growth for companies and so lower longer term equity returns. Bond markets may of course prove to be too pessimistic but their long term track record at forecasting growth and inflation has been good enough to earn our respect.

So what are our conclusions? First, ignore market chatter that says we are “due a correction” or “markets look a bit toppy”. In our experience, it never feels like the perfect time to buy (or sell) and this perfect time only ever appears in hindsight. Second, we don’t think we are late cycle or due a slowdown. This does not mean a slowdown won’t happen, just that the future has a habit of being different from the past and using past cycles to predict future ones is harder than you think. Third, and in spite of all this, our future projected returns are lower today than they have been in the past. But this mainly reflects today’s low interest rates rather than any doom and gloom over the outlook. If and when these rise, our return projections should rise with them.

Finally, our future return estimates are always available to our clients and, as ever, we are always happy to discuss them and appropriate risk levels with you as and when you want.