Here’s another short update on the Corona virus and its impact on markets and your portfolios. We highlight three major themes we have seen in the last few days but, as ever, if you want to discuss any of this in more detail, please do get in touch.

The panic in bond markets appears to be over

While equity markets normally grab the headlines, it remains critically important that bond markets and especially government bond markets have decent liquidity and can trade in a (somewhat at least) orderly fashion. In 2008 it was really problems in bond markets that triggered the problems in the broader economy and the subsequent falls in equities.

For a while in mid-March, this was just not the case. As an example, UK government bonds (a traditional safe haven asset) were up +11.8% through to the 9th March but then lost -10.5% in the next 9 days as forced sellers of fixed income swamped the market. Since then bond markets have recovered but, more importantly, liquidity has improved and bonds are reacting more normally to daily events. Part of the reason for this has been the US Federal Reserve, as well as the European Central Bank and Bank of England committing to buy (in effectively unlimited size) good quality bonds. We wrote that we sold our investment grade credit positions as we started to see these dislocations hit fixed income markets. Better conditions today plus the continued support of central banks means we are more likely to re-enter investment grade credit in early Q2. Also, the end of panic conditions in fixed income markets has made us turn a little more bullish on markets as a whole.

We wrote previously that we wanted the government support packages to be of a size that would really make a difference but also be accessible fast and easily accessible enough that the money would get to where it needed to go. We estimated 10% of GDP might be enough to cover a 3 month lockdown (and this looks to be close in size to where the US support plan has ended up). In fact the fiscal packages announced by various European countries are generally larger than this (see the chart below): 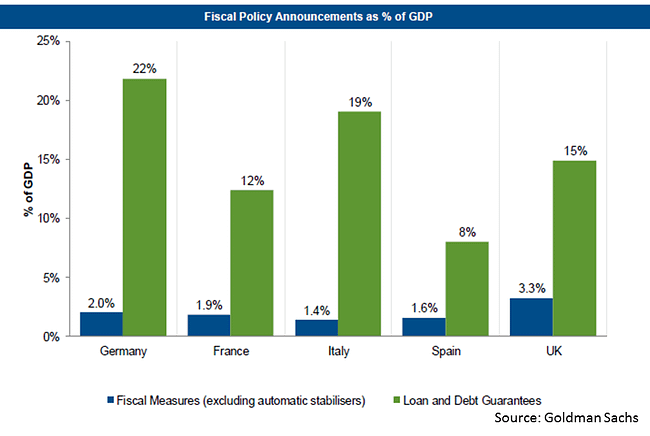 The question remains how widespread the adoption of these measures will be and also how support for the harder to target parts of the economy (including the self-employed) will work in reality. However, overall we would say that the support packages have been well received by the market and, for this week at least, have helped put a floor under equity prices.

Despite these two pieces of good news equity markets remain highly volatile. Recently, the volatility has been the good volatility of rising markets but the overall outlook remains highly uncertain. Equity markets are simply reflecting this with their continued large daily moves up and down. UK equity markets have risen over 15% from their lows following the announcement of the US fiscal support measures early this week. Whilst this is good news, it is worth noting that bear markets are often characterised by short, sharp countertrend rallies like this. This is primarily a public health crisis that is impacting the real economy. We have no sense of how long the current lockdown will last and how quickly we will return to some semblance of normality. Though the last few days have been positive we are reluctant to sound any sort of all clear here.

That said, the last few days highlight how important it is to keep invested in equity markets if you have a longer term time horizon. Though it is always tempting to seek the safety of cash and “wait for the dust to settle” this can mean missing out on weeks like this week. 15% is two years’ worth of normal equity market returns. This is too big a return to miss out on. We are therefore keeping our market exposure and are looking to add opportunistically. As we have written before, with returns in many safe haven markets (like government bonds) so low, we need to be brave to generate the longer term returns our clients are looking for. This we are continuing to do even if the relief of the last 7 days proves only temporary.