From a returns perspective, the third quarter may look at first glance pretty unremarkable. Our equity investments had a mixed quarter (global equities rose while the UK equity market fell), our “real” (inflation protected) assets did their job of beating inflation plus a bit and our (safety focussed) fixed income investments were broadly flat.

Of course, those of you that pay close attention to the daily news flow will be surprised to hear that. The news has been anything but unremarkable. A second wave of the virus has come to Europe. The soap opera that is the US presidential election continues to take ever more dramatic and implausible turns. The fact that a billionaire president apparently pays no taxes was not even the major story of a week that saw him fall victim to the virus and, as we write, come back to the White House in a triumphant helicopter return. Finally, Brexit rumbles on. The UK and EU continue to play hardball ahead of the year-end deadline for a deal. It still looks to us that a deal is as likely as a no-deal. 2020 continues to be 2020 and yet, through all this, the markets remained relatively sanguine. Why was this? And how are our portfolios positioned for these three potential risks? 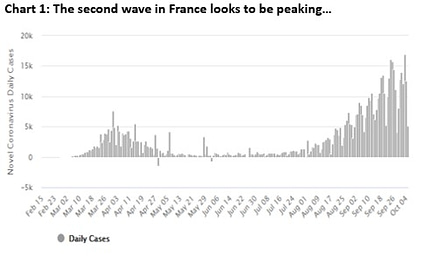 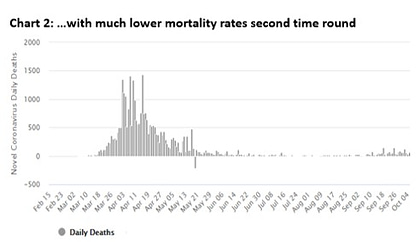 Covid-19: We are all Sweden now

In the short term, as long as cases are rising you have a problem. This is, of course, where the UK finds itself today but we think there are three reasons to be cautiously optimistic.

First, as with the lockdowns, we are lagging other European countries on the timing of the second wave. France and Spain in particular look to be a couple of weeks ahead of us. If this is the case then it looks like the rise in cases will continue in the short term but that hospital admissions and mortality rates should remain well below those seen at the peak in March. Chart 1 shows new cases in France which look to be close to peaking. If this is the case then hospital admissions (Chart 3) and deaths (Chart 2) should turn out to be much lower than the first wave. This was all achieved without a substantial increase in lockdown restrictions (Chart 4). 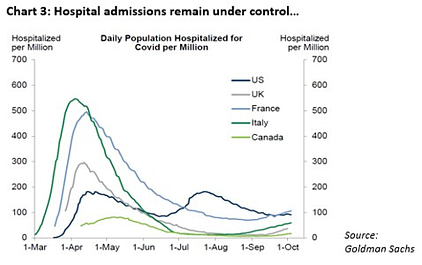 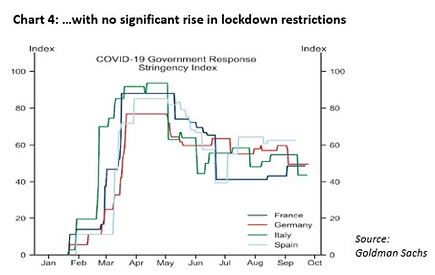 Part of the reason for the improvement in mortality rates is that our knowledge of the disease and treatments for it are steadily improving. As an example, a relatively cheap and widely available steroid (Dexamethasone) reduces deaths in severely affected Covid patients by around one third. This is being used today but was not widely in use at the disease’s peak in March.

Finally, there are currently 11 vaccines in the third stage trials with 5 approved for limited use. Forecasting markets now point to the likelihood that one or more will appear for widespread use in the first half of 2021 (priced at around a 60% chance today). Though this does not affect the short term risks of the second wave it does mean the medium term picture is a little more optimistic.

Better treatments and lower mortality rates mean that the reactions to the second wave in Europe have – so far – been more Swedish laissez-faire than Germanic strictness. This has kept the economic environment (broadly) steady with the likelihood of an improvement still in place as and when the vaccine arrives. Even as the second wave continues to wash through, the market remains focussed on the improving medium term picture. Markets remain remarkably insensitive to shorter term Covid headlines.

We have written several times this year that our focus remains on capturing the recovery from the shock of the virus rather than a focus on protecting against any further lurches down. As markets collapsed in Q1 we added some equities to our portfolios and in Q2 we replaced much of our absolute return allocation with credit investments which were better positioned to benefit from a recovering economy. To this end we added a little to our European equity exposure at the end of Q3. No doubt there will be more ups and downs in the Covid story but we think the worst is behind us and there are better days to come. 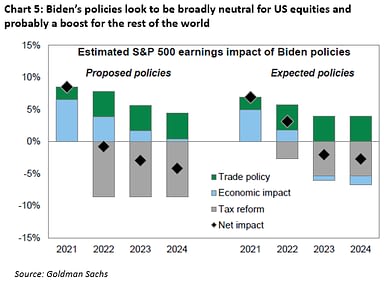 For US elections, however, the risks are firmly in front of us for Q4. We see two potential outcomes that might move markets. The first is a result so close that we have a contested election, with the legality of mail-in ballots in question and the Supreme Court (likely to be 6-3 Republican leaning) ultimately calling the election. This – and the potential trouble president Trump might stir up – has the markets nervously paying up for hedges that might pay off in early November. Ultimately, however, we think the Republican and Democratic elites will see the continuation of democracy in America. We would probably look to add to our equities if there was any significant election driven market weakness in November.

The second “risk” is the so-called Blue Wave where the Democrats (confusingly blue in US politics even though they are left-leaning) take control of the house, the senate and the presidency. Democrats currently control the house, have a two thirds probability of winning the Senate and an 80% or so chance of winning the Presidency so, as we write today, this looks the most likely outcome for the election and is worth entertaining seriously. A democratic clean sweep is likely to mean corporate tax reform, more fiscal stimulus and a reduction in Trumpian trade war rhetoric. Two of these are good for the market and one – tax reform which really means tax rises – is bad. Net/net Goldman Sachs estimate the overall effect to be broadly neutral for US equities with the benefits coming first and the tax rises coming later (see Chart 5). Outside the US, we expect our European and emerging market positions to be winners from a dialling down of the trade war. This is another reason why we selectively added to our European equity positions in Q3.

The UK and Brexit

Finally, Brexit. We have written many times over the last few years on Brexit and we remain ever hopeful that this time might be one of the last. We went underweight UK assets in Q2 on the risk of a no-deal Brexit. We remain positioned that way today and are watching the negotiations as they rumble on. If and when we see a deal being done we will look to add to our UK investments. The UK has been the worst performing major market this year and remains completely unloved and under-invested by the international community. As such, it looks like an opportunity to us on a deal being done (as it was in the second half of 2019 when the withdrawal bill was agreed with the EU). We remain hopeful we will be able to profit a little from Brexit in Q4.

If the worst of the pandemic is behind us, what new problems might lie ahead of us? One plausible candidate is a resurgence in inflation. The last time inflation was a feature of modern economies was in the late 1970s and early 1980s. This means that most people active today in markets have only worked in an environment of stable and (mostly) falling inflation. 10 year interest rates of 0.2% per annum today suggest investors are much more worried about Japan-style deflation. Inflation worries have been consigned to the dustbin of history.

That said, there are good reasons to think inflation might be ready for a comeback in the 2020s. The economic response to the pandemic has been unprecedented in its size. German fiscal support comes in at 50% of GDP. This compares to a 5% stimulus that the US government put in place after the 2008 financial crisis for example. Central banks have also responded faster and in greater size than ever before. It took the US Fed 7 ½ years to add $3.5 trillion of assets to its balance sheet following the 2008 financial crisis as part of its quantitative easing (QE) programme. When it restarted QE in March this year it added $3 trillion in just 61 days.

One theory of inflation is that this $3 trillion must, eventually, turn up in the real economy as inflation. This theory has been wrong so far. There has been no link between central banks QE bond buying programmes and actual inflation post-2008. Another theory is that as the unemployment falls, so wages will inevitably rise so triggering a wage price spiral. This theory might ultimately prove to be correct but if so we are a long way away from this being a problem. Unemployment is (remarkably) low in the UK today but this is mainly because of the government’s extensive furlough programme which at its peak covered almost 40% of the private sector workforce. As the furlough scheme unwinds unemployment will rise. We are a long way away from rising wages being a problem.

For now we therefore think inflation risk is subdued and we are investing accordingly. What if this reversed? We are aware these reversals can happen quickly and, given investor positioning, are likely to be short and sharp when they do. We therefore have an allocation to what we term “real assets” (including renewables, infrastructure and property) today to give some protection from an unexpected rise in inflation. If inflation picked up materially (which we think would be an extended move above 3% or so) we would look to add to these positions. We would also look to profit from some of the opportunities this would throw up.

As an example, a world where too much money is chasing too many goods is likely to be good for cyclical stocks (which are sensitive to the state of the economy) and for cheap and unloved stocks more generally (including, say, banks and energy stocks today). The FTSE 100 Index, which has many of these unloved stocks in it, is still down -22% year to date as we write. If inflation comes, we think there will be some catch up for these equities relative to the broader market. 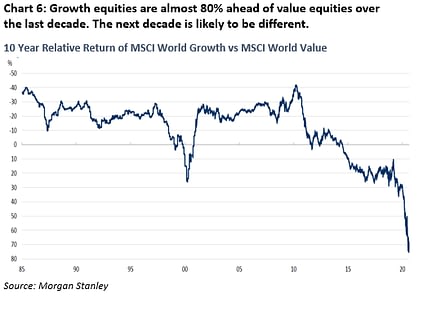 Similarly, if inflation rises we think interest rates will eventually have to rise with them. This will be bad for fixed income which is why we have a focus on inflation protected assets in our “real assets”. It will also, however, pose a challenge for “growth” style assets which have been the real winners of the last decade. Growth companies generally have most of their profit pushed out into the future. Part of the reason for their out-performance has been, with interest rates so low, the present value of these profits has been high. Investors are happy to wait for the profits to come given the low cash rates available today. As rates rise this effect should reverse. Toyota – which made a $23bn net profit last year – is currently worth less than half the value of Tesla, which made a $1bn loss. As rates rise we would expect this gap to close.

The opportunity for value style investments to catch up with their growth counterparts looks pretty interesting to us. Chart 6 shows the out-performance of growth stocks over value stocks for rolling 10 year periods. Today the out-performance stands at 80%, the highest it has ever been. Any kind of reversal of this trend to more normal historic levels should be good for value. There is a substantial body of academic evidence that value style investments do out-perform for those who are brave and stubborn enough to stick with them over long time periods. It may yet be that the 2020s prove to be the decade of value.

That said, and as we discuss above, we are positioned today for inflation to remain muted and bond yields to remain low. So far in 2020 this has been the right call. We are however, always on the lookout for the next big opportunity. A recovery of cyclical and value investments in the next few years might just be it.