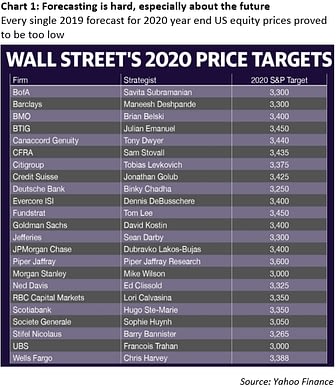 Let us begin our review with some humility. We will talk here about what happened last year and give our outlook for the year coming up. But, as Yogi Berra famously once said, forecasting is hard, especially about the future. To illustrate this we show the one year forecasts the best and brightest of Wall Street made for the S&P 500 equity index at the end of 2019 (so before anyone had heard of Covid-19 or the global pandemic). They ranged from 3,000 at the low end to a high of 3,600. As usual, and unsurprisingly given they were targeting a specific number, they were all wrong. The surprise comes from the fact that every estimate was too low. In fact the S&P 500 finished at 3,756, 4% above the highest of the 23 estimates. And this, to repeat, was before anyone had heard of coronavirus.

How did US equities rise in a year when the pandemic caused a 4.4% drop in global GDP and 9% fall in forward earnings? We wrote 3 months ago that there were three positive catalysts on the horizon that meant that Q4 2020 was a time to be a little bit brave. These were: (i) resolution one way or another in the US election, (ii) a likely Brexit deal and (iii) the possibility of positive news on a Vaccine. All of these duly arrived last quarter with the news on the Vaccine the biggest positive surprise. The truth is the surprises have on average been on the positive side since the lows of 2020. We would add to the vaccine the strength of government financial support to the economy, the strength of the consumer and robustness of corporate earnings as all being stronger than 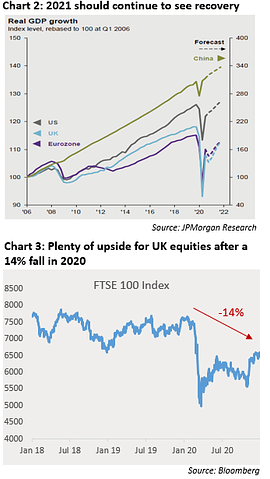 markets would have forecast in March. It was this and a sense that a recovery was on its way in 2021 that drove markets higher in the second half of last year. But, after a remarkable 9 month run from the March lows, is now the time to cash in before markets wake up to the economic reality the virus has created?

The weasel answer is that predicting any short term market move is a fool’s errand. Surprises and sentiment swamp fundamentals and economics. For the longer run (and we hope you are all more focussed on longer term returns) we still think staying invested today is still the right decision. One reason is that even after last year’s recovery we still see some clear opportunities that have presented themselves after the chaos of 2020. 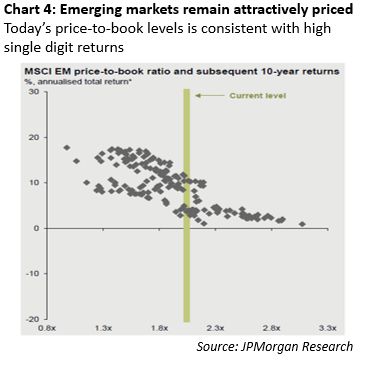 This still raises the question of how equity markets have remained so resilient in the face of what has felt like (and continues to feel like) a constant stream of bad news. We can offer two other longer term pieces of good news that generally won’t make the front page of your newspaper.

The first is productivity growth. Productivity growth is important because it is, ultimately, how we all (slowly) become better off over time. For all the talk of debt levels, market prices, politics and the economy we ultimately get richer by making more of the things we want with the same inputs of labour and capital. One of the mysteries of the last few years has been that for all the talk and evidence of technology becoming more and more important in people’s work and leisure, we have yet to see much impact in the productivity statistics (see Chart 5). However, the pandemic has changed that. Finally, productivity has bounced higher enabled no doubt by increased use of modern technology tools. To the extent this trend can be sustained then growth rates should eventually rise along with it. This is a support to corporate earnings and so, ultimately, equity markets. As an aside, we have certainly seen the impact of this at IPS Capital. Whilst we remain keen for normal life to resume and for us to be back in the office again, many of the changes we made to cope with remote working have improved how we work and will be here to stay even after the pandemic ends. 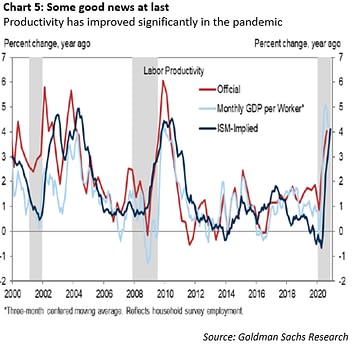 Secondly, it is worth mentioning fiscal policy. In the aftermath of the 2008 recession, there was much talk about the need for austerity. This limited government support for the economy and much of the support that did come was provided indirectly by central banks cutting interest rates and buying bonds via quantitative easing (QE). This time round, talk of austerity is nowhere to be heard. Instead, the US simply mailed cheques to the US consumers to help offset the impact of the recession. This is the “helicopter money” that has been longed talked about in theory but was thought to be too radical to attempt in practice. Well, they have done it. The longer term impact of this on inflation and consumer incentives remain to be seen (why be sensible if the government is always there to bail you out?). In the short term, however, it is clear this approach has worked. As an example, consumer spending is almost back to where it started the year in the US. This means that governments have an important new tool to fight slowdowns with. It is unlimited in size and, as long as interest rates remain at or close to zero, it comes with very little cost. There is no reason to think this support won’t be there in the next slowdown we all face and today’s equity values in part reflect the new toolkit governments have to deal with economic problems.

Risks to our Outlook

That said, we don’t want to pretend that all is  rosy in the world. There are inevitably some pretty clear and obvious dangers out there and it is worth taking some time to address them. The major concern we have today is that some (limited) parts of markets look to our eyes to be in definite bubble territory. The risk remains that when these bubbles burst (as eventually they must) the collateral damage will spill over to the broader market and the real economy itself. One of these bubbles is in electric vehicle (EV) companies. We should point out that the problem is not with the companies themselves but rather with today’s valuations. Tesla, the standard bearer of the EV industry, now trades at a valuation of $1.25m per vehicle sold in 2020. This compares to $9,000 per vehicle sold for the VW Group. Remember, VW owns Porsche. Is Tesla more valuable than Porsche? Maybe, maybe not. Is it more valuable than Porsche plus Audi, VW, Bentley, Skoda, Seat and Lamborghini (all parts of the VW Group). We doubt it, but it’s possible. Is it 140 times more valuable then VW per car sold? No.

And Tesla is a great business that actually makes cars that people want to buy. At the next level down in size there are plenty of companies that are little more than ideas. Take Nikola (a shameless derivative of the Tesla name) which has zero sales, no real intellectual property and a $6bn market valuation. As Jeremy Grantham, the storied value investor at GMO, likes to say, there is nothing more irritating than watching your neighbours get rich. Tesla was up 740% in 2020 and Nikola rose over 650% to its June 2020 peak (it has, thankfully, returned to earth so 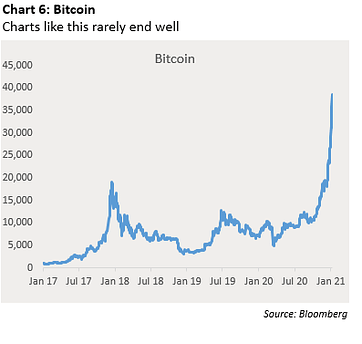 mewhat since then). Some of your neighbours are no doubt getting rich. Unfortunately, for those who remember the dotcom boom and bust on the late 1990s, there is no way of telling how long or how far all this will continue. For prudent longer term investors, however, we would encourage you to look elsewhere for your returns.

Which, finally, brings us to Bitcoin. Here, again we see a spectacular bubble like rise. As we type, Bitcoin is already up 30% this year having gainedalmost 300% in 2020. Parabolic moves like this do not end well (see Chart 6). That said we think the overall Bitcoin story is more nuanced. First, as with gold, there is no real fundamental valuation anchor at play here. Bitcoin pays no return so, on a fundamental basis, a price of $300 is not really that different to $3,000 or $300,000. You are simply hoping that one day someone will come and buy your Bitcoin at a higher price than it trades today. Also, and again like gold, if enough people believe in it then that is enough for Bitcoin to become what they want it to be: a credible alternative investment and, ultimately, a store of value. We think Bitcoin has crossed that credibility threshold. The start of Bitcoin futures trading in 2017 broadened the market to institutional investors. Since then we think enough people have bought into the digital gold story for it to become, well, digital gold. There remain many technical risks that people more expert than us understand and most investors seem happy to ignore. Bitcoin is also not yet approved by the FCA for retail investment portfolios so you won’t be seeing it in your investment reports any time soon. That said, we think Bitcoin as an investment is here to stay. It has survived one burst of the bubble (it fell over 75% in 2018 from its 2017 high) and will survive as an investment however this bubbly rise ends.

Finally we would of course like to take this opportunity to wish our clients a healthy and prosperous 2021. As ever, if you have any questions about our investment positioning or the year ahead please do get in touch.