As you will already know, Russia began invading Ukraine early Thursday morning with shelling and rocket attacks on several major cities including the capital, Kyiv. Our thoughts at this time are of course with the innocent people of Ukraine. But as investors we are now caught between rising geo-political risks and adjusting to a higher inflation rate environment. This has triggered the falls in markets we summarize above. Below we discuss the current market backdrop and the opportunities it might present for us. As ever, if you want more colour on any of this please feel free to get in touch directly. 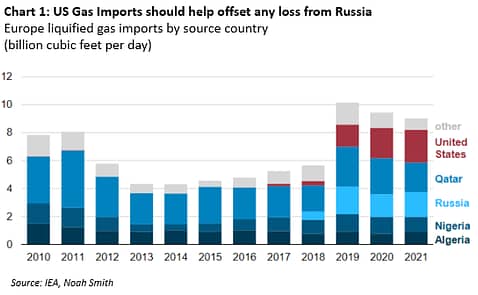 First, Russia and Ukraine. US equity markets are down over -11% year-to-date as we write this but you should note that only -4.5% of this fall has happened since Biden’s speech warning of an imminent Russian attack on Ukraine on February 11th. To put this into context, Deutsche Bank have looked at the 30 biggest geopolitical or domestic US political events over the last 80 years. The median sell-off was -5.7% over a three-week period with markets typically recovering their losses over the next three weeks.

Things may well get worse from here: there is no way to know how far Putin will push his invasion plans or how serious is his talk of rebuilding the Russian empire. But either way we see the proposed sanctions as having a limited effect on the global economy. Russian oil sales are unlikely to be affected much as oil that would have gone to the West will simply flow to China instead with Saudi Arabia diverting it’s China oil westward to replace it. (This is effectively what happened with the Iran oil sanctions.) Stopping the gas flow to Western Europe would be more serious and add to short-term energy price pressures but given the slow build up for the crisis in Ukraine we think Europe should be able to weather the crisis, in part because gas imports from the US have recently grown sharply (see Chart 1).

Ultimately this looks to be more of a political and military crisis than an economic one. As longer term investors this might be an opportunity to pick some cheaper, unloved assets at reduced prices. We took some profits on some of our less expensive, so-called value assets during the rally in 2021. Many of these companies are located in the UK and Europe which are more affected by the Russia/Ukraine situation. The next few weeks may yet provide a good opportunity to buy some of them back again.

Part of the reason this looks attractive to us is that we think the longer term threat to markets comes from inflation risks and the potential for more interest rate rises. As so called value equities already trade cheaply they are less at risk from a valuation fall if interest rates start to rise. We have already seen this effect in play so far this year. Markets have moved from thinking that rates would stay more or less at zero in 2022 to pricing in 5 rate rises this year for the UK and 9 consecutive rate rises in the US starting in March.

This has put pressure on the more expensive ends of the market, and particularly more speculative technology and growth stocks. Table 2 shows that almost half the stocks in the US Nasdaq market are now trading below their 52 week high (so have halved or more in the last 12 months). We expect this pressure to remain as long as inflation continues to rise. 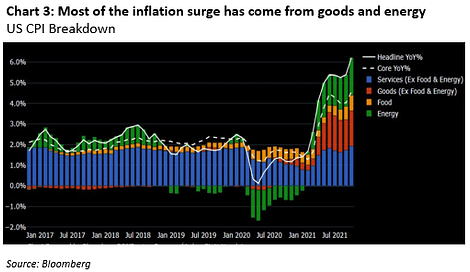 Will the rate rises that are planned be enough to see a fall in inflation from here? Here we are more optimistic, at least for the second half of 2022. In the short term, much of the inflation pressure has come from mainly goods and commodities (see Chart 3). Part of this has been because of supply chain issues meaning there were simply fewer goods available as demand picks up. We are starting to see early signs of supply chain pressures easing. As an example, waiting times for ships outside of the main port in Los Angeles are back to more normal levels (see Chart 4).Once any Russia related oil and commodity shocks pass through we are optimistic the inflation picture should start to look better in the second half of 2022. 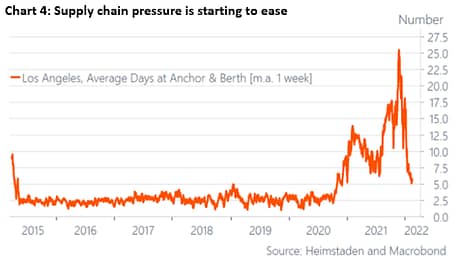 Importantly, the markets also think the longer term inflation situation is under control. As evidence for this Chart 5 shows inflation expected by the markets for the US and Europe using inflation swap markets (where, effectively, you can bet on what longer term inflation rates will be). Longer term inflation expectations are shown in the chart by the 5 year 5 year number which is average expected inflation for the 5 years starting 5 years from now. It is striking to us that this is in line with pre-pandemic levels and below levels we saw in the earlier part of the previous decade. Though it is hard to know how long the current inflation surge will last, markets think it will pass without rates having to rise much higher than 2.5% in the US and 2% in the UK. 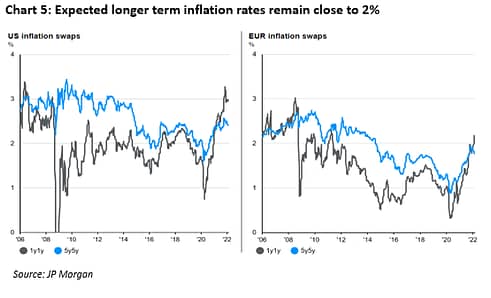 Our strategy for the last 12 months has been to own a blend of attractive companies with low valuations (many of which can be found in the UK and Europe) combined with more expensive companies that (like Amazon say) look to be structural winners for the next decade. Clearly, in the short term, Russia/Ukraine pushes you away from the so-called value part of our book. However, longer term this looks like an opportunity to add to our value positions which are also less at risk if inflation does indeed prove to be a longer term problem than markets think today. We will of course continue to keep you in touch as the situation and our strategy evolves.