Review of the first half of the year

The numbers in Chart 1 paint a pretty grim picture for the first half of the year. This has been one of the worst starts to the year on record for equity markets and the worst start since at least the 1930s for bonds. For equities this is in part just a calendar year effect. The drawdowns just happened to start in January. The average drawdown for (US) equity markets in a year is 14% in any one year. The 20% drawdown we have seen year to date is larger than average but by no means exceptional (see Chart 2). Equities are often volatile and never like uncertainty. The uncertainty we have lived with all year is how far interest rates will have to rise to slow the post-pandemic inflation. We think we are starting to see some sign of hope here which we discuss below but until this is resolved we are braced for more ups and downs.

Equity performance has been unpleasant but in no way unusual. What has been unusual has been that the other main component of most portfolios – fixed income investments – have been just as volatile. Normally it is recessions that trigger large equity losses and fixed income provides a buffer against this. Here, however, rising interest rates (and so falling bond prices) have been the problem that have driven equities lower. 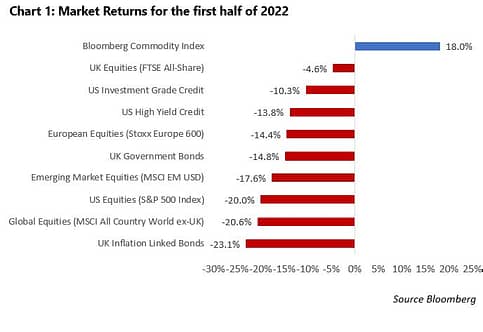 It is worth mentioning the Russian invasion of the Ukraine here. This threw oil onto the inflationary fire and it is only now that we are starting to see commodity prices fall from their March highs. Often geo-political events often have a bigger impact on headlines than markets but – aside from the appalling humanitarian cost – this was the wrong geo-political event at the wrong time. If Putin continues to weaponise gas markets then Europe in particular will continue to feel its effects for the rest of the year and into winter.

Equities and bonds therefore lost money in the first half of the year. There is, however, a third part of our portfolios which is our allocation to alternative assets. These include investments in infrastructure, renewable energy, specialist property as well as gold. Many of these investments have the attraction of producing cashflows that are either linked directly or indirectly to inflation and they did a good job preserving value even as inflation took off. The good news is that these investments did their job and on average held their value or gained a little even as other markets fell. The bad news is that this was not enough to offset the losses in the core equity and fixed income allocations of your portfolios.

If this is the bad news is there any comfort you can draw as you look at this quarter’s returns? One thing we would point out is that falling prices today raise your expected returns tomorrow. One way to think about it is say I could time travel and know the price of the US S&P 500 index in 5 years’ time. As US equity prices fall today so the future return to that level (whatever it might be, high or low) automatically goes up. As prices rise so future returns fall. Aswath Damodaran of the Stern School of Business at New York University has run some estimates of this effect which we show in Chart 3. At the start of the year, US, government bond yields stood at 1.5% and – given the higher equity valuations in place then – expected equity returns were 5.7%. At the end of June, however, US bond yields (a decent estimate of future long-term returns) had risen to 3.0%. Aswath estimates today’s future long-term equity return to be 9.4% per annum. This is done via a technical measure known as the Equity Risk Premium. There are, of course, other ways to estimate returns. The point though is that, all other things being equal, as prices rise you would expect your future returns to fall. Today – even with all the doom and gloom out there – the opposite applies. 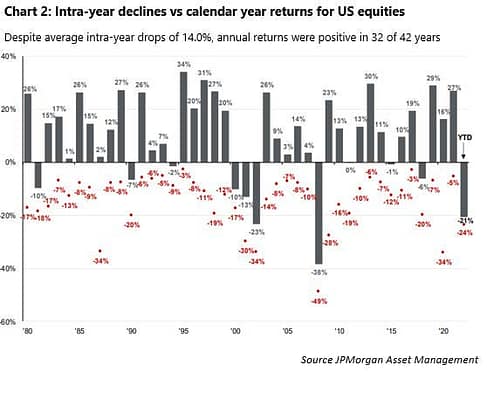 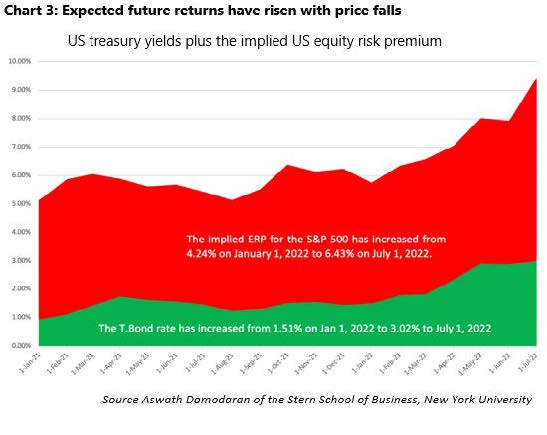 This is, however, a longer term (10 year plus) outlook. We also have the job of preparing for and thinking about the short term – and by that we mean the rest of the year. Here we are using the broad-brush framework you see in Chart 4. 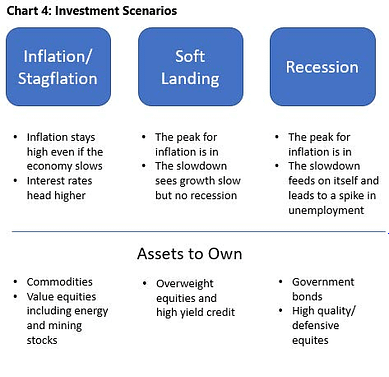 The first point to make is that the future is uncertain and surprises (like the Russian invasion of Ukraine) can happen. We therefore want to make sure we have investments that work in all three of the scenarios we show. As an example, for the inflation scenario we are keeping some energy and commodity linked equities in case demand remains strong and inflation remains high. We have also increased our allocation to alternatives which have some inflation linkage. For the recession scenario we cut our equity allocation in Q1 (mainly to fund alternatives) and we have kept our allocation to government bonds. If the economy slows sharply from here government bonds should be an attractive diversifier again. Finally, as is often the case in investments, sometimes something else happens. We have kept our core long term investments (which have caused the majority of the year-to-date losses) in place. In any kind of benign slowdown/soft landing these should recover what you have lost so far this year and more.

That said, our job is to make sure we have the most exposure to the most likely scenario. What is our outlook for the rest of the year? For the last 12 months inflation has been firmly in charge. We are, though, beginning to see signs that this may be peaking. Chart 4 shows the falling cost of container freight rates. Commodities – which spiked after the Russian invasion of the Ukraine – are also starting to fall. Oil is 17% below its post inflation highs in USD terms and 10% lower in sterling terms. As interest rates rise so housing should slow down (with a lag). This is particularly true in the US where mortgages typically have a 30-year fixed rate but are fully repayable. Interest rates on these sorts of loans have more than doubled since the start of the year (as they have in the UK for 5-year fixed rates for example). We are just starting to see housing inventories rise and prices soften in response to this. Housing costs are (with a lag) a significant part of the rise in US inflation and residential property is a big driver of the economic cycle (as we saw in 2008 for example). As this slows so should the economy.

The big unknown remains wages. The US labour market remains hot and wage growth will eventually need to slow to be consistent with a long-term inflation target of around 2%. How far do interest rates have to rise to pull this off? Will we need a rising unemployment rate (and hence a recession)? This is what we are looking out for in the second half of the year and if we see continuing strength in labour markets we will adjust our portfolios accordingly. 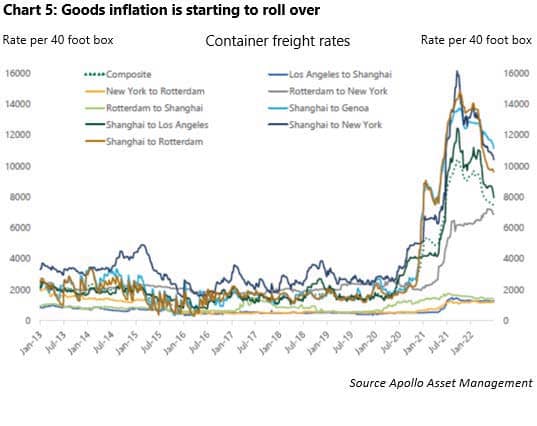 The UK and Europe

At this point you may have noticed this update has focussed mainly on US markets and the US economy. This is partly because it is the world’s largest and most liquid market and what happens there will often drive returns elsewhere. However, it is also because the problems I have described above – the economy running too hot and interest rates are being forced to rise to slow it down – apply most there. The story in Europe is more nuanced. The US is energy independent. Europe is not and so the shock from the Ukraine war has been far greater (particularly via the increased cost of gas imports from Russia). Energy price shocks take money out of consumers’ pockets that they could spend elsewhere. Europe also has softer labour markets (and so less wage pressure) and may already be close to a recession. If Putin weaponises gas this winter then Germany in particular might suffer. When we cut our equity exposure in Q1 it was (mainly) Europe we reduced for these reasons. We will need the geo-political situation to settle down before we can re-enter those positions.

Which brings us finally to the UK and the tragi-comedy that is the current political situation. You will read enough elsewhere from people better informed than me about this. All I can tell you is that it will have approximately zero impact on the returns for your investment portfolios. This is partly because the majority of your equity investments are in international companies. (The UK is 3.2% of global GDP and 4.0% of global equity markets today). It is also because the markets view one conservative party leader as being very similar to the next one. The next labour government (should it appear) also looks likely to be closer to the Tony Blair/Gordon Brown vision of the labour party than the Jeremy Corbyn wing. Whatever your political affiliations, you should know that the current political gyrations are having almost no effect on your investment portfolios.

I would hope this gives some of you some comfort. As ever, if you wish to discuss any of this in more detail please do get in touch or come to visit us. It would be great to see you.