For those that don’t know, I am the Chief Investment Officer at IPS Capital. Each week I highlight few things that have come across my desk that I think are interesting and investment related. We always welcome dialogue so if you have any questions we’ll be happy to answer them here too.

Want to see a sharply rising chart from the US that is not about inflation? This week I saw the percentage of US Congress that is over the age of 70. For such a dynamic and image focussed nation, I find it incredible that this percentage is now almost 25%. Joe Biden, Donald Trump and Bernie Sanders are also all older than Bill Clinton is today (he became president aged 46). And these three are also older than the famous, and widely mocked, gerontocracy that ruled the Soviet Union in the early 1980s (Breshnev, Andropov and Chernenko). Whatever you may think of Liz Truss, at least she is comfortably under the legal retirement age.

Percentage of the US Congress over the age of 70 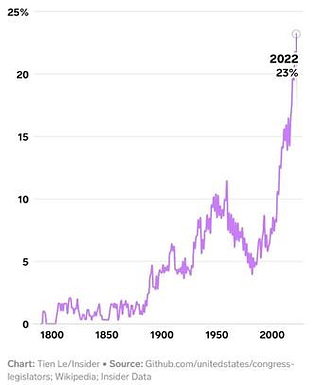 US house prices and inflation

OK, that was your break from talking about inflation. An important part of US core inflation – which excludes volatile food and energy prices – is housing. The importance of this is shown in yellow (as Shelter) in the chart below. 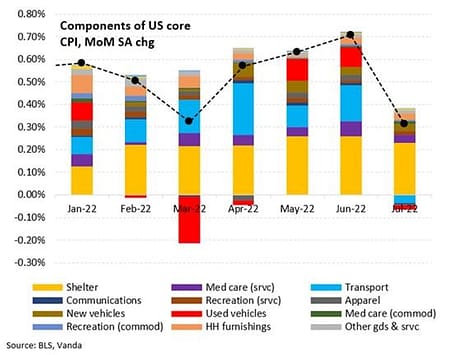 There are lags at work which mean that shelter is still picking up the rise in rents and house prices that happened in the first half of the year. However, as you can see below US house prices fell in August for the first month since 2011. Rents are also starting to roll over. At some point the pressure on core inflation from housing will also surely start to ease.

And this is from a country where most borrowers are on 30 year fixed rate (prepayable) mortgages. Interest rate rises therefore do not feed directly into mortgage payments. It is only new borrowers who have to pay the higher rates. Contrast this to the UK where the majority of mortgages are either floating rate or fixed for 3 years or less. As rates rise people will steadily be rolling into mortgage payments that will have doubled (or more). The impact on UK housing from rising interest rates will surely be larger than it is in the US. Recession risk looks higher in the UK than most of the rest of the world. At some point the UK will become a buy, but for now we are happy to retain our focus on international assets. 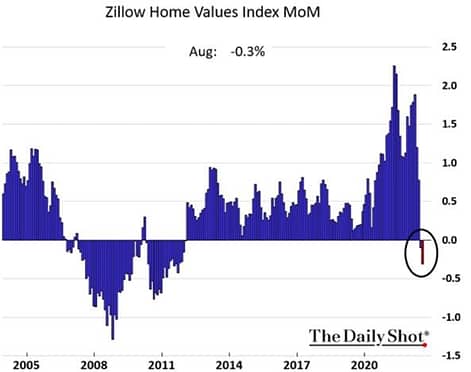 That said, it is often darkest nearest the dawn. Keeping some exposure to unloved areas means that you do capture the recovery if and when it happens. For an example of this, look no further than Turkey. A basket case economy, led by a populist autocrat and with inflation running at 80% p.a.

This is also one of the year’s best returning markets. Up 29% year to date in dollars and over 40% in sterling terms. We are not tempted by Turkey but we think there may be similar opportunities in beaten up UK and Eurozone assets in the months and years to come. Turkey serves as a reminder to us that sometimes the best returns come hand in hand with the most unloved fundamentals. 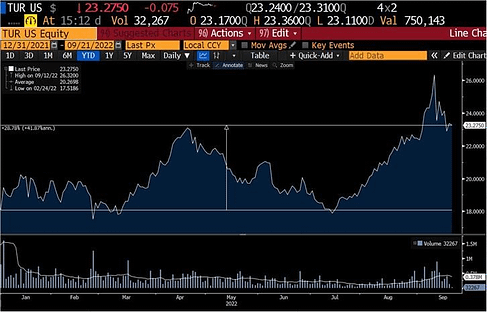