For those that don’t know, I head the investment team at IPS Capital. Each week I highlight few things that have come across my desk that I think are interesting and investment related. We always welcome dialogue so if you have any questions we’ll be happy to answer them here too.

The recent news-flow out of the UK has been dramatic and, let’s be honest, pretty negative. This is in part because it is the nature of news to focus on the short term and the bad things. Media constantly need your attention to be able to sell advertising, subscriptions or to justify the license fee. And it turns out we are (for lots of understandable, survival-based reasons) wired to be alert and pay attention to the next bad thing that might be round the corner. That said, it has been pretty bad recently. I think the newspapers have basically had it right for the last few weeks.

However, this human bias means that we can often underplay longer-term, good news stories like lower global poverty rates, better survival rates for cancer or falling crime levels. So, in the interest of balance, here is some good news about, of all places, the UK. Here is GDP per Capita (the total economic output for a country divided by its population) over the 30 years up to the end of 2019: 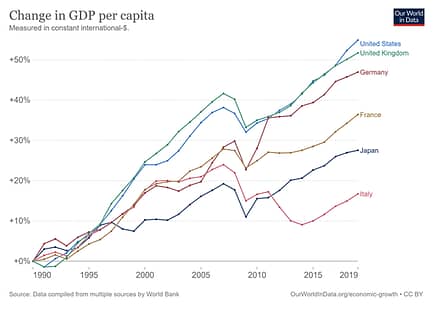 I stopped at 2019 because the last available year was 2020, the Covid year, which disrupted everything. This does not exactly speak to a country in long term economic decline. One other advantage we have (because of historically relatively high levels of immigration) is a younger population. This is helpful as ultimately the young help support the old. The more young people a country has the less pressure there is on pensions and healthcare costs. 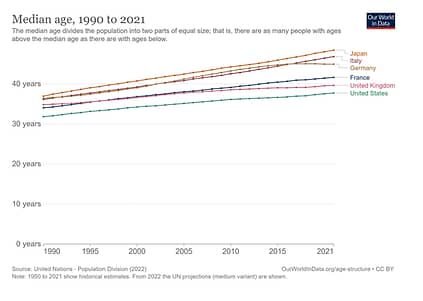 So the long term picture is pretty good and we have demographics on our side looking forward. What’s the bad? First, income in the UK goes more to the top end than the middle. Here is median income (so the income the average UK person earns) relative to the other major developed nations. Here the picture is less rosy. This might be one reason why Truss’s tax cuts for the rich proposals were generally not well received. A lot of the gains made over the last 30 years have flowed to the people at the top. 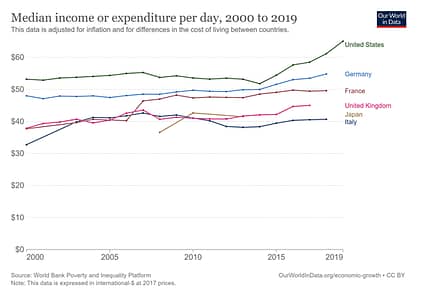 Also, since the financial crisis in 2008 we have been doing less well relatively. Here is the same GDP per capita chart but started just before the financial crisis. You’ll see our performance has been pretty average. But – in spite of what you have may been reading in recent weeks – the UK is no Italy. Unfortunately, it is no Germany either. 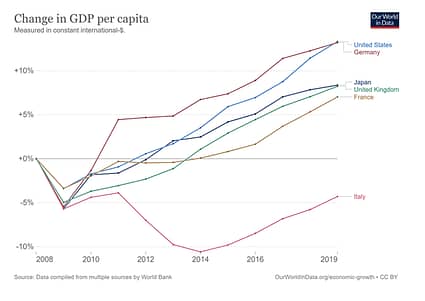 Still, and especially in a time of crisis, it is important to keep focussed on the longer term opportunities. We have a tough winter to get through and there will be recession in the UK next year. But after that? The longer term outlook is probably not as bad as you might first think. Also, having knocked the media a bit at the start, the sense of crisis it creates does make us focus on and address the problems we have. With a little bit of competent leadership from the new government we might be on the upswing again by the end of 2023.

This is relevant to us as investors because often it can pay to look through the cycle. This particularly true (i) at the time when things start to turn around and (ii) when nobody is invested. We are still in the (early) part of the slowdown so it is too early for us to be thinking of adding to the UK today. However, the UK is particularly unloved today. Fund manager survey data shows it is the most unloved region globally (though China might now start to give it a run for its money). Money is also flowing out of Western European equities (including the UK).

We have recently been allocating to shorter term bonds yielding around 6%. That way we are getting paid to wait for the UK recovery story to begin. We are not there yet but when it happens we think – as in the second half of 2020 – it will prove to be a great opportunity.