For those that don’t know, I head the investment team at IPS Capital. Each week I highlight a few things that have come across my desk that I think are interesting and investment related. We always welcome dialogue so if you have any questions we’ll be happy to answer them here too.

Markets have continued to recover some of this year’s losses. This week, I look at three pieces of data that came out in the last few days that are helping support this recovery. If you are not a German football fan, this may give you some comfort going into the weekend. If you are a German football fan, I have made the extra effort to find a ray of hope for you. This ray of hope is at the end.

The story so far this year has been central banks raising interest rates and these higher interest rates slowly putting the squeeze on investment markets and the economy. There are two areas of the US economy where this is clearly showing up. The first is housing – where higher interest rates mean fewer buyers, lower prices and fewer transactions. The second is technology companies, where higher interest rates have popped the bubble in the frothier parts of the technology market. As valuations have come back down to earth so companies have switched from expansion and investment to survival and job cuts. Below is the layoff data for the US technology sector so far this year. You can see the spike in November as the job losses announced by Twitter, Facebook and many, many smaller companies have finally arrived.

US Technology Sector Job Losses in 2022

Meanwhile, consumer spending remains strong. To fund this consumers have been dipping into the money they saved in the pandemic. Personal savings data came out for the US yesterday and the October number was the second lowest on record (the data series starts in 1959).

US Personal savings: consumers are spending their pandemic savings 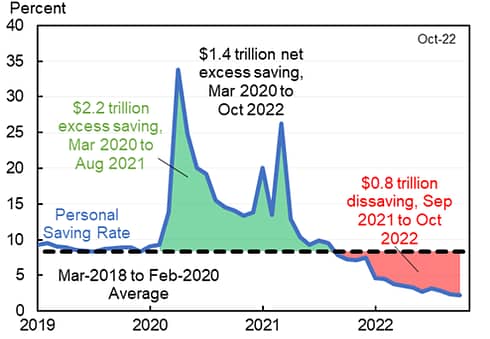 This is of course helping keep the US economy moving. We also had out ISM survey data out this week. While this hardly shows strength, the backlog of new orders is picking up which is a useful leading indicator of future growth.

US Industrial Activity is picking up again

My favourite cartoons as a child were the ones where a Roadrunner was chased by a demented wolf with an unswervable faith in the products of the Acme corporation. The risk is, of course, that at some point US consumers have a Wile E. Coyote moment and realise there is nothing really supporting their current levels of spending. We are still underweight equities in our portfolios because of this risk. But we feel we have enough skin in the game to have captured our fair share of the recovery in asset prices we have seen so far this quarter. A soft landing still feels unlikely for the US economy, but this week’s mix of data makes it look more likely than it did a few months ago.

You’ll notice I just made a prediction of sorts about the outlook for the US economy. One thing that makes predictions like this hard is the so-called butterfly effect. Small, seemingly unrelated events can snowball into something much larger. This is particularly true for large, complex systems (like the economy) which involve large amounts of human interaction. The most famous example, I suppose, would be the assassination of the heir to the throne of the Austria-Hungary empire by rebellious Serbs in 1914. This led, step by step and misjudgement by misjudgement to World War 1 and then to World War II and the Europe and world we see today.

A (hopefully) less dramatic event caught my eye this morning. The goal that put Germany out of the World Cup looks to have been kept in play by less than a millimetre. One alternative scenario is of course, that this goal was ruled out, Germany trundled on in the tournament and not much happened to the German football establishment. Thanks to today’s technology, this is not the path we have gone down. Germany are out. There is now a path where this proves to be the shock that improves the German coaching and youth development set up.

As an Englishman I say this with a heavy heart, but yesterday’s shock result for Japan may yet be the catalyst for future German football success.

One millimetre can change everything